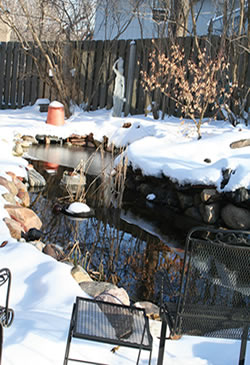 Successful water gardening takes some knowledge, but it also requires attention to details. When conditions are less than desirable, extra steps need to be taken to prevent potentially disastrous results. During extremely cold weather, the potential for many problems to occur becomes more prevalent and can separate those who have done their homework from those who have not. These temperature extremes do not forgive mistakes and can be lethal to fish and entire pond ecosystems. (For a good explanation of overwintering fish in extreme weather, please refer to my article, "Overwintering Koi Under Thick Ice," in the September/October 2009 issue of POND Trade.)

What extreme cold weather situations are we addressing? Extremes include the actual temperature, but also the length of time that those cold temperatures stick around. Weather conditions that create permanent ice cover for several weeks would qualify as stressful to fish and ecosystems. Of course, colder conditions can occur, and ice thickness, as well as length of time the ice persists, can be greater. What works to keep pond ecosystems alive during one winter may not work in a winter when conditions become more extreme. These conditions can prove lethal, or at a minimum, stressful to the fish, making them more susceptible to parasites and disease.

Winter conditions with heavy icing do not allow for many, if any, mistakes, even for a day or two. There are many factors that dictate how many days a situation can be ignored before it is fatal to pond ecosystems. Each situation is different and depends on many factors, which will be explained. In more moderate weather conditions, ecosystems can be more resilient, allowing a few days of inattention without problems.

Don't Get Too Comfortable

How many times have you heard something like, "I overwintered my fish the last three winters without any aeration, so I know that it is unnecessary to aerate my pond"? Or perhaps, "My large koi died this last winter in the same pond that I have overwintered them in for the last five years." Those who say these things will wonder why there was a problem this year when there were no problems in the past.

In the above situations, there are a lot of things going on that cannot be seen. Of course, the severity of the winter can change from one season to the next, but over the years the fish population, as well as the size of the fish, may have increased. The sediment load may also have accumulated over the years, causing demand for more oxygen. The mistake is in thinking that you do not need aeration because you have been successful without it in the past.

What are some of the mistakes that can potentially be made? One of the most common slip-ups is thinking that simply having a heater in the pond, keeping a hole open in the ice, will successfully overwinter fish in extreme weather. This is a huge misconception.

Aeration absolutely must be present in our ponds, especially during the winter. (Again, please refer to my overwintering article for an explanation of how to add aeration.) Adding a pond heater, in most cases, is a waste of electricity. Most ponderers feel better about adding heat, and I do understand why. In certain situations I do recommend a floating heater to keep ice from forming in certain spots, like in front of a skimmer box. I also like adding heat in really small ponds and to above-ground ponds. But these ponds also need aeration. Not checking whether aeration is working every day is a mistake made quite frequently that can have serious consequences. A lack of oxygen can occur overnight, as well as a buildup of toxic gases. The fish and even the entire ecosystem can die - or at least be stressed within short time frames. If checks cannot be done every day or two, then two air pumps should be run. The possibility of both pumps and the associated tubing failing is remote; however, other aspects of the system can still fail, so frequent checks are still very important. Rodents or rabbits have been known to chew through the tubing. Moisture can accumulate in the tubing and freeze. The power can fail, causing both pumps to not work. Even when power is eventually restored, the air line can be frozen.

As winter approaches, make sure all the fish are healthy and well-fed. Adding new fish right before winter is not recommended. New fish are very susceptible to problems until they become acclimated to the pond. If fish do happen to die under the ice in early winter, they are difficult to detect and remove. The rotting fish could cause toxic enough conditions by the middle of winter to kill the ecosystem and the other fish. Dead fish do not decompose as fast in the cold water, but after a month or two they become toxic to the system. If possible, attempt to see your fish under the ice several times during the winter.

For those who have to endure three months of heavy ice, it is important to learn that ice can keep our fish secure. However, it is very difficult to go that long without seeing and monitoring the fish. Attempt to peer under the ice at every opportunity, but try to create as little disturbance as possible.

Areas in a pond with low oxygen levels (dead zones) can be detrimental to a pond at any time of the year, but in winter these zones are extremely lethal. These dead zones are characteristically more prevalent in ponds built with a complicated design. Good examples of potential dead zones include the far side of an island and the inlet to a stream that is not running during the winter. Aerated water cannot easily get to these zones due to the design. Fish that swim into these zones may succumb quickly before they realize that it is lethal. This can be viewed as similar to when human workers enter a confined space that has toxic conditions. The fish can barely "flick a fin" due to the cold water, let alone swim out of these areas quickly.

When this happens, typically the first contributing factor was in the initial design. Avoid over-complicated designs, even in more moderate winter regions. Recognizing that this is a potential problem is the first step. But when the design cannot be changed, then the next step should be adding additional aeration in those zones - or at least fencing off these areas so that the fish cannot get there.

Salt in the water can be lethal to the fish during the winter due to its characteristic of lowering the temperature at which water freezes, preventing that ice layer from forming at normal freezing temperatures. Salt added during the warmer months does benefit the fish by helping them maintain their osmotic balance. However, the salt needs to be removed by making water changes before cold temperatures arrive. 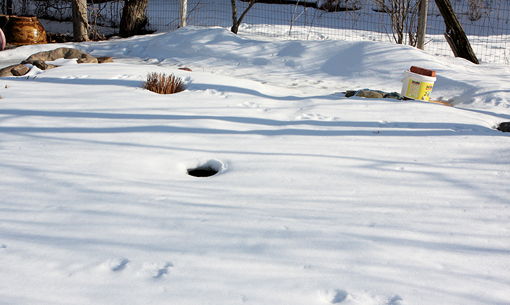 A lot of ponderers are focused on keeping snow and ice off a pond. This is a huge mistake. "WHAT?" you may. "This kind of thinking is blasphemy. How can this be a mistake?”

In many areas of the country, when the temperatures are consistently below freezing during winter, you want an ice layer to form and stay on the pond. It forms a protective barrier against even lower temperatures. When the winter winds and snows are howling, fish are under that ice, "snug as a bug."

It may seem counter intuitive, but the snow and ice provide a secure, quiet environment. Shoveling snow off the ice, like a lot of references recommend, is a mistake. The scraping and banging of the shovel on the ice disrupts the fish's environment and causes undue stress. It is recommended by some because, without snow, sunlight is better able to penetrate to the algae, thereby allowing oxygen to be generated by them. But the amount generated is insignificant, and if fish are dependent on this type of oxygen generation, they are doomed.

Oxygen must come from aeration and from the hole in the ice that it creates. So, do not make the mistake of shoveling snow off the ice. (Besides, it is a lot of work!)

The tendency for many folks is to want to reduce the ice layer so that it does not exist. The thinking is that less ice means a better environment for the fish. That is mistaken thinking for those who have winter temperatures consistently below freezing. The ice keeps the water temperatures from undergoing huge fluctuations. These fluctuations in relatively small bodies of water without an ice cover can be as much as 15 to 20 degrees during one day/night cycle. When our ecosystems go through these kinds of temperature swings, it creates an unhealthy situation. The fish are stressed and disease can become prevalent. Do not make the mistake of removing the ice. Besides, again, it is a lot of work.

There are mild winters, or winters in warmer zones, where ice is not as prevalent, and these winters are potentially more stressful to fish than the winters that have colder temperatures with consequently more ice. An important thing to remember is to not make the mistake of trying to rush the ice and snow melt. Let things melt and acclimate naturally.

Another mistake in ponds with fish is to not make a water change of 10 to 20 percent two or three times during the winter. During summer we may experience rains that will automatically make our water changes. However, salts and toxins can build up in the water, even during the winter, and water changes will reduce these to normal levels.

In moderate weather conditions, ponds and fish are more forgiving when mistakes are made. The fish may still survive. However, mistakes during extreme winter weather - such as allowing a dead zone to exist, not having aeration (or allowing it to fail for even a day), adding new fish in the fall, not removing the salt, not making water changes, shoveling the snow and/ or removing the ice - can be fatal. At a minimum, they can be stressful to the fish and the pond ecosystem. These are mistakes you simply cannot afford to make during extreme weather.

Jamie Beyer Water gardening has been a passion of Jamie's for over 50 years and he has worked on over 1,000 ponds. He personally has several very large ponds, which contain many kinds of water plants and fish. Jamie has a Master's Degree in Fish and Wildlife Biology, is a lifetime Master Gardener and is founder and past president of the Central Iowa Water Garden Association. He has a broad background in fisheries, the dynamics of water, horticulture and aquatic and wildlife ecology.

He owns a consulting/installation business, Midwest Waterscapes, in which he works as a water garden, fountain and pond consultant/installer.