New hobbyists must learn ways to combat winter distress in their pets. 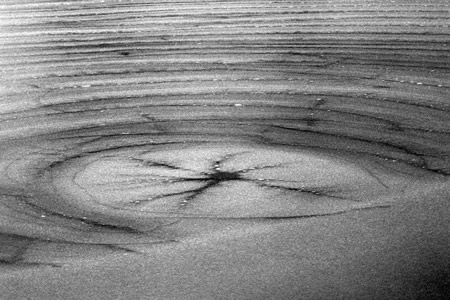 Winter means different things to koi keepers in different regions, but whether it’s 60 or 16 degrees in your area during the winter months, nature still can wreak havoc on your koi pond.

For koi hobbyists in places like Florida or California, winter doesn’t hinder their enjoyment of their yards or koi. For people along the Great Lakes or in other places with harsh winter climates, however, the season requires critical planning for a successful spring.

No matter what side of the Mississippi you live on, you must use the final days of summer to prepare for the fall and winter seasons.

Some Indiana hobbyists start feeding their fish high levels of protein in late August into early September. As the temperature begins to cool and Labor Day passes, they switch to wheat-based diets, says Becky Maier, president of the Enchanted Koi and Watergarden Club, which has members in central Indiana and central Ohio border areas.

Hobbyists should stop feeding their fish entirely when the temperature drops down to a constant 50- or 55-degree water temperature, says Jim Slider, vice president of the Capital Area Koi and Water Gardening Club, which serves hobbyists in lower-central Michigan.

In some climates, temperature fluctuations might make it difficult to know how to maintain your pond and your fish. "It's possible to get a 70-degree day in December," Maier says. "The fish may come up to the surface and want to eat."

Maier warns that new hobbyists might feel tempted to feed the fish, but she warns against it. "Once you stop feeding them, you have to quit until spring," she says. In the colder water temperature, fish metabolism slows, and food will rot in their intestines. "In the spring, as they become active again, the [rotten food] will actually blow out their stomachs."

The algae that live on the bottom of the pond provide enough nourishment to sustain the koi throughout the winter months, says Edward Reed, sergeant-at-arms of the Triad Koi and Water Society, which has membership in the Winston­Salem and Greensboro areas of North Carolina.

t's critical to get down and dirty every fall and give your pond a thorough cleaning. In some climates, where the fall season is only a few weeks long, hobbyists might need to do a lot of work in a short amount of time before their ponds begin to ice over.

"The most common mistake I've seen beginning hobbyists make is that they don't clean their pond good enough," Slider says. Start by trimming your plants at the first signs of color change. Tropical plants should be moved inside to a warmer location, and most other plants can be submerged, Slider says. The submerged plants provide an additional hiding place for the fish.

Next, don't let too many leaves accumulate on breezy autumn days. Remember that it's more difficult to get to leaves once they have settled at the bottom of the pond.

"The leaves sink to the bottom and decompose and create methane gas that can kill your fish," Slider says. One member of Slider's koi club lost all his fish last year because of this deadly mistake.

Depending on how much foliage surrounds your pond, you might want to invest in some good netting to go over the top of your pond. These nets also may deter predators such as raccoons, cats, birds or other wildlife from trying to fish out a snack from your precious koi collection.

Then clean out filters, skimmers, sump pumps and other pond components, Slider says.

''A new hobbyist may unknowingly do more harm than good while cleaning their ponds if they squirt everything down with their city water," says Rod Lawton, president of the Southern Koi Association based in Gainesville, Fla. Lawton advises using dechlorinated water or pond water instead of the garden hose to ensure that you don't wash away the good bacteria with the bad.

Remove any ultraviolet filters, pumps or other electronic devices that you won't use and which could suffer damage from the dipping temperatures if left in the pond.

For more experienced hobbyists, try a potassium permanganate treatment in late summer or early fall, Reed says. "It's made a tremendous difference in water clarity and getting rid of debris at the bottom of the pond. It's good for smaller things that are otherwise missed."

PP is a water-soluble, crystalline oxidizing agent. If used properly, the treatment can eliminate more of the organic material that might be difficult to remove.

In Sickness and In Health

In some cases, if a pond is not properly cleaned, bacteria can grow and spread disease throughout your pond. "The bacteria don't die in the winter, they just go dormant," Maier says. "You may not recognize you have a problem until the spring."

Bacteria growth - both good and bad - blossoms in the spring. "The spring is really the dangerous time of year for bacteria," Reed says. That bacteria can get a head start on spring if you don't tackle it in the fall.

Hobbyists should be on the lookout for early signs of stress and sickness in the fish. "It may be hard for a new hobbyist to tell, but you should look at their behavior and notice if a fish just isn't acting right," Lawton says.

If your pond is not frozen over and you're able to get a look at your fish, check them for ulcerations, pine-cone-looking scales, bulging eyes, red streaks in the fins or increased lethargy.

"Red spots are actually holes and can be an entrance wound for a fluke to put a hook in," Lawton says. Lice, which show up as a roving black dot on a koi, can be visible on a fish that swims in a dirty pond. Lawton advises, "If you take care of the water, the water will take care of the fish."

The Weather Outside Is Frightful ...

Once the water temperature hits 38 to 40 degrees, Maier shuts down her pond and maintains aeration with a bubbler.

"The fish go to sleep in the winter, and we just hope they wake up in the spring," Maier says. She has maintained a pond through 10 years of harsh Midwestern winters without a heater for her pond.

Slider recommends that hobbyists in areas of the country with cold winters use an aerator, a heater or a combination of the two to maintain the health of their koi. "If you have over 200 square feet of surface area, you should go to both a heater and an aerator," he says.

Never beat on the ice with a tool to break it, Reed warns. "It will send shock waves into the water and stress the fish out," he says.

Instead, carefully rest a pot of hot water on the top of the ice sheet to slowly melt a hole in the ice, Maier says. You also must check the water levels and add water when necessary, Slider says.

"I monitor my filter to flush things out, and I still continue to do backwashes and add water to the pond through the winter," Lawton says.

Besides dipping temperatures, Mother Nature can stress your pond and its inhabitants by stirring up hurricanes, tornadoes, ice storms and other extreme weather conditions.

"If you get hit with a blizzard, you can lose power and have mechanical failure of your components," Slider says. Having a generator ready to go in case of inclement weather is a good idea, Lawton says. ''A decent generator will run the air supply and the water pump at the same time."

Along the eastern seaboard, hobbyists such as Reed get used to hunkering down for hurricane conditions by securing plastic or other coverings on their ponds. Covers also can keep heat in your pond if you experience periodic frosts or temperature dips.

"There's very little you can do when you get a big wind like that," Reed says. "The fish will be down at the bottom of the pond, and they may be better off down there than we are."

... But Inside It’s So Delightful

One member of Capital Area Koi and Water Gardening Club drains his pond in the winter and brings his koi indoors to ride out the winter storms, Slider says. "He brings the fish in and houses them in a folding tank in his house."

While not all hobbyists have the space to bring their fish indoors, it does make it easier to keep an eye on them. You also can use an indoor tank year-round as a quarantine tank. One of the drawbacks to sharing your home with your koi is "the more you handle the fish, the more it can stress the fish," Slider says.

Maier never has brought her adult koi inside for the winter. "My fish are 2 or 3 feet long, so there's nowhere to put them," Maier says.

Maier does breed her own koi and has sheltered some baby koi inside her garage to guard them from the extreme weather conditions.

"I didn't get them acclimated in time for winter," Maier says. "It's a lot of work to keep the tank clean and feed them constantly. Normally we welcome the winter because it's a break or a rest period for us."

Hobbyists who enjoy 60-degree daytime temperatures throughout the winter are able to enjoy the spirit of their ponds during the entire season. Others may have to be a bit more creative.

"Some people are able to run their ponds throughout the winter, and it creates some nice ice formations," Slider says. Even if it's not cold enough to form ice, the cooler temperatures generally clear up the water so it's easy to see the fish at the bottom, Maier says. "It makes the water crystal clear. You could see a dime at the bottom of the pond."

Reed, like other hobbyists in his area, brings the warmth of the indoors around his pond by lighting up a chimenea. "We like to sit out by the pond and talk and have guests over for hot cocoa," Reed says.

Additional lighting might boost the backyard ambiance during the season when the sun shines for fewer hours. "When you add the lights to an already nicely landscaped yard, it does look pretty," Slider says.

Based in Southern California, Scott and Ann Springer are freelance writers who specialize in pet and water gardening topics.

Item of the Week