Many retailers and owners do not know that ponds benefit from aerators in summer as well as winter months, experts said. 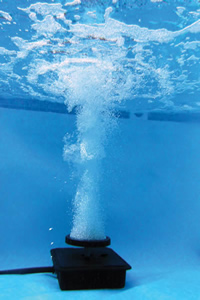 Teaching pond owners that aerators serve important functions in the summer and winter months will be key in the coming years to improve their water quality and reduce their overall maintenance, said Aaron Scarlata, business development manager with PondBuilder Mfg. in Saginaw, Mich.

"Aeration provides oxygen, a key component that bacterium needs to survive," Scarlata said. “Homeowners realize that even fish aquariums have aeration, so maybe their ponds should too.''

Because they often are marketed to keep water movement or aeration percolating in the pond during the cold season, owners think aerators are a winter product, said Chris Thier, U.S. division manager for Laguna Water Gardening in Mansfield, Mass. Water movement in the pond keeps the water from freezing over.

Even in the winter months the dormant fish respire and give off carbon dioxide, Thier said. A build­up of carbon dioxide in the pond can prove detrimental, so aerators keep the water open to allow the gas exchange to take place. Thier said for the last few years he has encouraged water garden retailers to consider the benefits of aerators in the summer months. New sales resulted, he said.

"Summer is the time when aeration can be needed the most," said Bob Robinson, a fisheries biologist with Kasco Marine Inc. in Prescott, Wis. "The ability of water to hold oxygen is temperature dependent. The warmer it is, the less it can hold. In summer, densities are the highest, feeding rates are the greatest and general biological activity comes to a peak."

"When you go out in the morning and all the fish are at the surface looking like they're ready for breakfast, it's not that they're mouthing for food," Thier said. "They're gasping for air."

Richard Schuck, owner of Maryland Aquatic Nurseries Inc. in Jarrettsville, Md., also emphasized the importance of aerators during the hot summer when oxygen can be dangerously low. Aerators circulate the water, preventing deadly thermal stratification during months of rapid temperature change, he said. They also offer great benefits in winter.

"It's better than a pond heater, as it vents off toxic gases and keeps a hole in the ice," Schuck said. "Most importantly, it supplies oxygen to the aerobic bacterial processes that consume organic waste in the pond. The pond stays cleaner and the fish are healthier."

John Van Kampen, president of Scott Aerator Co. LLC in Holland, Mich., said the surface current the aerator creates helps prevent floating surface algae and mosquito breeding. Fish depend on and thrive on higher oxygen levels in ponds, he said, and water gardeners will notice a huge difference in their fish's behavior within a few days.

"The introduction of oxygen into the water makes fish noticeably more active and less lethargic, "Van Kampen said. Sometimes consumers get confused between circulation and aeration, Blake said. When retailers ask if they have aeration, he said consumers often explain that they have a waterfall, a skimmer and a pump.

"It does provide aeration value - it puts oxygen in the water - but it is not an aeration unit, "Blake said. "It gives you a little bit of oxygen, but it doesn't give you a lot of oxygen."

Most people think if the water is moving, there's enough oxygen. Really it must move appropriately, said Joel Kammeraad, general manager of Complete Aquatics in Plain City, Ohio. All the water must meet the atmosphere at some point. This increases in importance in ponds with heavy fish loads, he said.

Many people come into a garden store with a concern, whether it's algae issues or sick fish or plants, Blake said. "Generally they're giving you symptoms and saying this is what's going wrong," Blake said. "Our job is now to open the tool box and say, 'Here are some fixes."'

Aeration is one of the tools in that toolbox that retailers can hand to consumers, Blake said, with an explanation of why oxygen is important. It is easy to convince customers that they need aeration, he said, especially if they see retailers using it in the display ponds, because they can see the water is clear.

“The neat thing about aeration is that it's inexpensive to run," Blake said. “A small system might only be 4 watts. That’s a fraction of a light bulb. It’s a really effective, efficient way to get a pond healthy.”

He recommended looking to large pond marketing and incorporating the tools they use effectively. Better signage and pointing displays to advertise small aeration systems in garden centers will build awareness, Kammeraad said.

"There are some very nice products that are concentrating their efforts on large pond management, and they have very nice displays," Kammeraad said. "We just need to take that same opportunity to say that aeration is a year-round cycle, and it’s a very economical way to increase the dissolved oxygen in the water.”

Aeration is an aggressive category with much growth potential, Blake said, because most ponds do not include aerators. Kammeraad also reported on the rise in aeration. He said he expects to see greater interest in aerators because of products correctly sized for backyard water features.

Some water garden owners want to use few pond chemicals and treatments, and aeration offers options to keep ponds clean and algae-free, Van Kampen said. He also receives more requests for solar­ and wind-powered options. For landscapers and garden centers, aeration offers the chance to revisit existing clients and discuss how aerators could improve their water features, Kammeraad said.

"We're optimistic that 2011 will bring a healthy increase in sales of water features - not just pond aerators and fountains, but water­fall kits, plants, lighting and more," Van Kampen said. "With gas prices going higher and higher, more people are choosing to stay at home and enjoy their own little piece of heaven."