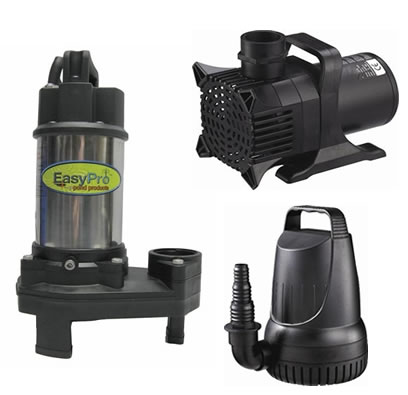 The keyword in pond pumps these days is efficiency, said Demi Fortuna, director of product information at Atlantic Water Gardens in Mantua, Ohio.

"Although electric consumption always has been a consideration, it's becoming an overriding concern, and for good reason, "he said.

Pump costs are often the single greatest cost over the lifetime of a pond, Fortuna said, especially to run ponds constantly during the season and year-round in mild climates. For example, a 5,000 gallon per hour pump drawing 1,000 watts at 10 cents a kilowatt an hour will add $72 a month to the utility bill, he said.

"Multiply the $500 cost of a new pump ever three years, and moving the water in a pond with a lifespan of 15 years will set the customer back $15,000 above and beyond the original installation cost, "Fortuna said. "Cut the wattage to 500 watts for the same flow, and you save $7,500. That's compelling arithmetic, even at 10 cents a kilowatt, and electric costs will only go up."

Pond owners are pushing for a move toward greater pump efficiency and to water features, such as fountains and pondless waterfalls, that do not need to run 24/7 and can be turned off at will, he said.

"People tend to consider this type of pump in usually two applications, "he said. Some customers opt for water features they can turn off at will.

"First, the pond enthusiast who has a larger system requiring a high­RPM pump can benefit in electrical savings with the speed control [a variable-speed] pump provides. The other type has a water feature and regards the variable-speed pump as more of an entertainment device whereby they're able to change the appearance of the water feature or fountain with the push of a button." Breidenbach said two-speed pumps were most popular when users needed the high-RPM pressure to backwash their filters and the low-RPM flow to re-circulate their ponds.

Fortuna said contractors look for reliability and bulletproof performance, while homeowners might also be concerned about operating costs.

Chris Lee, owner of Rock Garden Nursery and Landscaping in Sioux Falls, S.D., and co-inventor of the Pump Commander, said his goal is to hone in on pond owners' concerns about pump life. As a pond installer, he has seen many new pond owners burn out pumps when they let water run low in their ponds, despite his warnings. In fact, it was a customer's frustration with pump failure that sparked the invention of his pump device that cuts power to the pump when water runs low to safeguard pump life.

The device fits between the pump and the electrical service. If the device's sensor is exposed for five to seven seconds and senses low water, then it trips off the electricity to the pump. A flashing light warns pond owners about the low water in the pond so they can investigate the problem. Then the owner must manually reset the device to restart the pump.

Early warning about water level issues can safeguard pumps and prevent premature pump replacement, Lee said. It also saves installers from the hassle of servicing and re­placing pumps under warranty, even when they suspect that the pond owner was at fault.

Bill Minnick, president of E.G. Danner Mfg. Co. Inc. in Islandia, N.Y., said his company is looking to hydroponic technology to introduce a pump for water gardens that moves air and water to create a better environment for fish and plants.

"The oxygen it supplies allows the nutrients to get into the roots of the plants that much faster," he said. "It absorbs the nutrients faster and more completely. We've learned through our hydroponic technology that the oxygen helps plants thrive."

The pump recirculates nutrient­rich water and aerates in a single operation, Minnick said, which might appeal to pond owners with koi and plants.

New pump models appear on the shelves every year, but more changes with the products on display at trade shows and in the local garden store than just the packaging. In fact, manufacturers continuously test their products to find ways to improve, said Rick Smith, director of sales at EasyPro Pond Products in Grant, Mich.

Breidenbach said the engineers who design his pumps develop their own performance tests, and then develop the pumps according to the best flow rate and head potential of each motor size. Lee said he tested his new product in the worst possible conditions to make sure it could withstand ill treatment from consumers.

For manufacturers, the process of improving the product is an exciting part of the industry, and they enjoy the experience of testing and devel­oping new and improved prod­ucts for installers and pond own­ers, Smith said. "It's always exciting when we find a way to fine-tune a pump to increase flow rate and reduce ener­gy consumption," Smith said.

The key behind successful installations is a successful matchup between the pump and the project, said Rick Smith, director of sales at EasyPro Pond Products in Grant, Mich. Each pump design features a range of strengths. The right pairing proves critical to achieve the best results and for the pump’s longevity.

Direct-drive pumps with high torque motors directly connected to heavy-duty impellers were the industry standard for rock-solid dependability, the ability to pump to high heads and through restrictive plumbing and their capacity to handle dirty water and pass relatively large pieces of solids, said Demi Fortuna, director of product information at Atlantic Water Gardens in Mantua, Ohio. This comes at the cost of high electric consumption.

According to Fortuna, rising energy costs and concerns for greener features led to the introduction of pumps that deliver high volumes at much higher efficiencies.

“Asynchronus magnetic-induction pumps, referred to as hybrids because they combine the efficient, one-way impellers of direct-drive pumps with lower-wattage magnetic-indution motors, are starting to move to the fore,” Fortuna said. “With capabilities up to 6,000 gallons per hour for less than 500 watts, these pumps are an attractive alternative for low- to medium-head features, pumping clean, soft water.”

Axial-flow pumps, which sacrifice high head capability for tremendous volumes at very low heads, are moving from their aquaculture roots into the mainstream, he said.

“Finally, variable-speed technology, a mainstay of industrial pumping applications, is moving into residential water features,” Fortuna said. “Power systems are also evolving with solar and hybrid battery systems almost ready for prime time, although their use currently is restricted to a few hours a day and minimal water flows.”