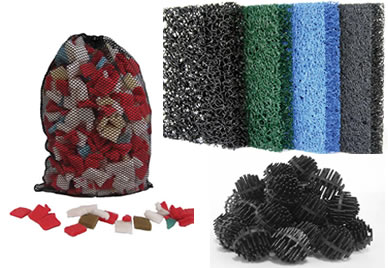 In new-pond construction, filtration systems - both mechanical and biological – prove vital. The type of media housed in such systems represents an equally important consideration.

Dave Jones, owner of the Pond Professional in Woodstock, Ga., and executive director of the International Professional Pond Contractors Association, said almost anything can serve as filter media. "I've seen people use old hair curlers and plastic Army men," he said. The ideal media depends on the situation, including whether the media is meant as a mechanical or biological means of filtration.

Pond owners and builders must weigh several criteria when selecting filtration media, according to John Russell, CEO of Russell Watergardens & Koi in Redmond, Wash. Those criteria are cost, ease of cleaning and specific surface area, which dictates how much bacteria can colonize on the media.

Common filtration media, such as pads, often rank high in the surface-area department, but they prove challenging to clean, Russell said. Strapping tape filtration media often is simple to clean, but it lacks significant surface area so pond owners must use a lot more of it, he said.

Ben Plonski, president and owner of Matala USA in Laguna Beach, Calif., said owners do not need to select one media. What is important, he said, is understanding the strengths and weaknesses of those available. "There is no one perfect media," Plonski said. "If you use different media for what they're good at, they can complement each other."

Demi Fortuna, ProLine product manager for Danner Mfg. Inc. in Islandia, N.Y., reported a gradual move in biological filtration away from materials that clog quickly, such as lava rock and micro-porous ceramics. "Organic debris in the typical pond environment will clog the small pores of microscopic media almost immediately," he said.

"This is significant because the bacteria that remove ammonia and nitrites from the water column require oxygen to metabolize those toxic compounds upon which they feed. "Thus, the clogged pores of lava rock or ceramics go anaerobic very quickly, so bacteria colonies only can survive on the outside surfaces, he said.

It takes two to four weeks for slow-growing ammonia-reducing bacteria colonies to develop into a biofilm on the media, Fortuna said. "Once the colonies are established, pond keepers try to nurture them," he said. "Open media that allow oxygenated water to contact all surfaces have become the norm, both for their ability to keep the oxygen available to all the bacteria on their surfaces and for their easy-to-clean profiles that slough off debris readily, leaving the bacteria refreshed and ready to go after backwashing."

Les Wilson, director of equipment and UPG marketing at TetraPond, said his company searched for solutions outside of the pond industry and found open-profile biomedia. "This media has proven successful in the aquaculture business where fish load, debris and sludge pose significant problems," he said.

A unique filtration media that Jones reported seeing is Hydro Filter Silk by Russell Watergardens & Koi. Consisting of a material similar to a loofah-style pot scrubber, the product's high specific surface area allows it to be used as biological or mechanical filtration media, Jones said.

Russell said the company envisioned surface area and ease of cleaning with the new product.

Carlos Flannery, owner and main designer at Aquatic Escapes in San Antonio, Texas, said he prefers Savio Springflo for biological filtration media. "Unlike filter pads or lava rock, this does a fantastic job of surface area and ease of cleaning," he said.

For ponds with particularly heavy fish loads, Flannery said he sometimes places a filter pad or two atop the embossed ribbon to increase the polish in the water.

Beyond ribbon-style media, Bill De Brosky, co-owner of Mystic Koi & Water Gardens in Upland, Calif., said he prefers using the Kaldnes moving bed system, which is designed to fluidize via a small amount of moving air. The wheel­shaped media constantly circulates within the filter, removes dead bacteria on the outside and enables new bacteria to colonize, he said. The inside of the wheels provide a protected environment for bacteria colonies to mature and run their full life cycles.

Covering All the Bases

“Matala's market appeal came by offering multiple densities suitable for both mechanical and biological filtration," Scarlata said. "Not only has Matala media stood the test of filtering but also the ongoing washes needed to rid the media of colonized sediment. The technology of Matala has raised the bar for biological media matting, leaving the industry waiting for the next generation of filter media."

Plonski said Matala was designed with the sole intention of filtering koi ponds, where a lot of media on the market came from other industries. "All media are good at some things and not others," he said. "Matala is made in four different densities so you can choose what to use for a particular application."

Regardless of the media used, Plonski said without a properly set­up system, a pond will have inadequate filtration. "ln most cases, people's ponds don't have enough mechanical filtration, biological filtration and aeration," he said. "The filter tanks are just too small, no matter the media inside."

On average, healthy ponds require 2- to 8-cubic-feet of media per thousand gallons of water, Plonski said. That figure encompasses all three stages of filtration: mechanical, biological and polishing.

"The closer you are to that 6- to 8-feet mark, the more stable your pond will be and the better your pond will look," Plonski said. "At 8 cubic feet, you probably won't need UV clarifier. Unfortunately, with most filters, we're only looking at 1 cubic foot. Such filters need frequent backwashing."

It can take one to two years to build a thriving pond bio­ecosystem, according to Ploriski. Thus, implementing a filtration system that enables a pond owner to clean the mechanical element while leaving the biological system relatively undisturbed for long periods of time proves key, he said.

"If a filtration system is not built properly, you literally will be washing away your ecosystem every time you clean the filter," Plonski said.