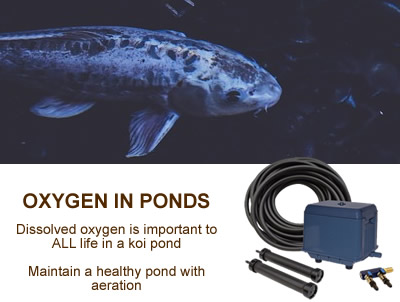 Dissolved Oxygen Concentration (DOC) is the term given to describe the amount of oxygen that is dissolved in pond water. It is measured in terms of how much oxygen (by weight - mg) is dissolved in every litre of water. There are many factors that will affect DOC in a koi pond, some of which we can control, others we cannot, but can respond in a number of ways to guard against problems.

Of course, dissolved oxygen is important to all life in a koi pond, not simply the fish, and they all have a demand on the finite supply of oxygen dissolved in the pond water. The number of oxygen consumers in a pond will determine whether the dissolved oxygen concentrations in the pond are likely to be a problem or not, with a larger density putting a greater strain on the resource.

Oxygen Consumers in a Koi Pond

In relation to the activities of bacteria and other micro­scopic pond organisms, the oxygen demand by koi is not the greatest (but this will vary with stocking density). Compared to many other fish species, koi are relatively tolerant of low dissolved oxygen concentrations (which is understandable, being a fish from slower moving warm waters). The range of DOC in a pond will run from a minimum (0mg/l) to a maximum (about 15mg/l), where even the supply of additional aeration would not change the DOC. A trout requires a high DOC of about 12mg/l while the more tolerant koi can only require a much lower 6 mg per litre. Even so, below this, for short periods of time they can gasp at the surface to gain their required oxygen.

Koi are equipped with gills, which have a very fine and delicate structure. Gills are used to absorb the oxygen that passes through them with some oxygen being dissolved in the water. They are very efficient at removing oxygen, absorbing 80% of the oxygen that speeds by their gills in the water (compare that to about 20% efficiency of our lungs). Furthermore, koi are able to pack the oxygen from 100 ml of water into 4 ml of blood. Quite a feat of bioengineering!

The majority of bacteria in a pond are aerobic (requiring oxygen) mostly found in abundance in the filter. The activity (and oxygen demand) of a bacterial population will vary, depending on the water temperature and the amount of food that is present for them to break down in the water.

The bacteria involved in breaking down ammonia into nitrites and then nitrates require oxygen. The greater the supply of ammonia and therefore nitrites, the greater the bacterial activity and oxygen demand. A further group of bacteria, known as heterotrophic bacteria, feed on organic matter, (both soluble and solid), that is present in the pond. As solids gather in a settlement chamber or excess food is allowed to float uneaten, the oxygen demand of these heterotrophic bacteria will rise as they gorge themselves on a banquet of food and fish waste.

The more mature a filter becomes, the greater the diversity of the invertebrate life that will colonize. A range of hungry critters from the virtually microscopic to the easily visible will all demand oxygen as they break down organic matter. Again, the more food there is to break down, the greater the demand on the pond's oxygen reserves.

Plants, both microscopic algae and larger plants, are oxygen consumers, day and night. Plants, like fish and all the other pond life, respire 24 hours a day, using up oxygen. Fortunately, the plants, during the day, also add oxygen to the pond's oxygen budget in excess of what they require in the day.

However, as most koi ponds are sparsely planted, particularly with oxygenating plants, then there is likely to be little oxygen added courtesy of the plant life. Furthermore, as fish stocking and feeding rates are in excess of what mother nature would decree, there is likely to be insufficient oxygen entering the pond passively by diffusion from the atmosphere. This can soon lead to an oxygen debt, where the demand and consumption of oxygen is in excess of the rate at which it is being added.

Factors that can cause the DOC to drop:

The demands on the oxygen dissolved in the pond can be extreme. If feeding rates are high and fish are at their most active, then koi will be consuming oxygen at a high rate, as will the populations of bacteria and invertebrates breaking down the ammonia and undigested organic matter excreted by koi.

Plants in the daytime are natural oxygen producers, exceeding their own oxygen demand. At night, however, they still use oxygen but are no longer producers. This can lead to DOC dropping at night, especially if your pond is suffering from an algal problem. If algaecides are used, which can cause algae to die off this can also present a problem as it attracts considerable bacterial activity all of which consume DO.

Temperature has a twofold effect on DOC. Firstly, as temperature increases the ability of water to hold dissolved oxygen decreases. Compounding this phenomenon is the effect that temperature has on the metabolism and oxygen demands of all aquatic life in a pond. As water temperatures increase, koi will consume more food, excrete more ammonia, which attracts more bacterial action in the filter. So just when a pond can ill afford too many demands on its oxygen, the oxygen requirements within a pond, including koi, reach their highest levels of the year. It is essential to step in and add more oxygen.

Pond treatments, both directly and indirectly, will cause oxygen to become limited in a pond. Any solute (dissolved substance added to a pond) will limit a pond's ability to hold as much oxygen as was possible prior to the addition of a solute. So when adding any treatments, additional aeration is always recommended.

Affects of low DOC on fish

Low DOC has very obvious affects on koi. If there is insufficient oxygen dissolved in the pond water, koi will respond in the short term, by becoming lethargic, swimming slower than normal, and perhaps hanging towards the surface.

If the condition persists or even deteriorates, koi will gather at water inlets or below a water fall and even start gasping air from the surface. By this stage they will already have become stressed, making them very susceptible to disease. Whenever I have taken a mucus scrape from a gasping fish, I have found an abnormally high density of protozoan parasites, busy capitalizing from the koi's momentary lapse of defense.

A low DOC is also likely to affect koi health indirectly, by adversely affecting the biological filter. The functioning of bacteria that are responsible for the breakdown of toxic waste is directly proportional to the dissolved oxygen concentration. Low DOC will lead to poor filter performance and a peak in ammonia/nitrite may well lag behind such an incident.

A DOC deficit is only likely to occur at warmer temperatures, and a change in koi behavior will be the first sign of a problem. A more precise method of quantifying the problem (or the margin of safety on a hot day) is with a digital DO meter. In an instant, it will show the DOC and more advanced units will indicate the degree of saturation by simultaneously measuring the water temperature. Even more advanced is a permanent DO monitoring system which will sound an alarm should DOC levels drop dangerously low. Such units are common place in intensive aquaculture and can also be used to detect either a pump or air pump failure due to the associated drop in DO.

An acute low DO problem can occur through equipment failure, through unforeseen circumstances, or overlooking the likely effects of a pond treatment. In either case, once low DOC is detected, remedial action should be swift.

Preventing a low DOC is far better than responding to a problem, and there are many aeration strategies that will solve the problem:

1) Air Pump and Diffuser.
Air is the most effective when it is pumped to the bottom of a pond or filter chamber and dispersed into as fine bubbles as possible. The deeper a pond is, the greater the head of pressure an air pump has to displace before managing to deliver air to a diffuser. Hi-blow pumps are the koi keeper's standard, delivering good volumes of air under pressures capable of reaching depths of 8'. Recognizing that both fish and filters are oxygen consumers, aeration should be added to both the pond and biofilter chamber. Avoid aerating settlement chambers as the mixing action created by the airstones will interfere with the settlement action.

The golf ball type of air diffuser is very easy to install and cost effective. Smaller bubbles can be achieved using different diffusers, such as leaky pipe, micro-bubblers and air domes, the latter converting a bottom drain into a diffuser where the airline can be trailed, out of sight, up the water pipe and into the filter.

2) Injection.
Venturis inject air into a stream of water as it returns under pressure from the pump. This is useful at creating a mixing effect in the surface layers of the pond water, but not regarded as effective as an air pump and diffuser system.

3) Waterfalls
These mix air and water as it cascades down the waterfall and enters the surface. In similar fashion to the venturi, a waterfall's beneficial effects are limited to the upper layers of pond water.

Dos and Don'ts to Avoid a Low DOC

Ben Helm is a qualified marine biologist, and since he was a teenager was fascinated by the aquatic world. His passion led him to work at the local aquatic store on an unpaid voluntary basis, eventually becoming the assistant manager. Later, he farmed koi for a living on an innovative koi farm in the UK. Ben was then appointed head of a brand new fish farming and aquatics department at Brooksby College, teaching and training students to make a living in the commercial aquatic world.

Ben was marketing and product manager with Nishikoi for six years developing their range of market-leading pond and koi foods and water treatments. As head of the Nishikoi lnfoCentre, he gave many pond and koi talks and presentations in UK, Europe and USA - which also led to some BBC TV and radio work. Over his career, Ben has written and had published nearly 300 pond and koi articles in the specialist aquatic publications around the world, with many articles being translated into Italian and Dutch. Ben still works in animal nutrition, for a global pet nutrition business - Premier Pet Nutrition.

More recently, Ben has written a top-selling pond book - The Water Gardener's Bible (Rodale) for which Kelly Billing wrote the chapter on pond plants (which has now also been translated into English and French editions). Ben Helm's website dedicated to pond and koi keeping advice and information shares its name with his book: http:/ /www.watergardenersbible.co.uk

Item of the Week 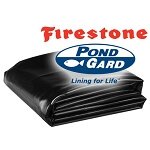