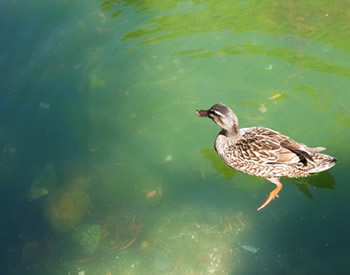 The scenario is the same no matter the location. One morning, the beautiful, crystal-clear pond water that existed the day before has vanished completely, replaced by the sludge of pea soup so thick that you barely can see the koi. This scenario, so common that almost every pond keeper has experienced it at least once, goes by the name of algae bloom.

According to koi hobbyist, pond designer and author Norm Meck, 5,500 species of green algae can live in fresh water. Green water usually results from the presence of millions of suspended, single-celled, planktonic algae (phytoplankton) that are 15 microns in diameter. The second most common type is filamentous, multi-celled algae (such as cladophora and spirogyra). These algae types can grow in strands of up to 5 feet or even create a matted variety that pond keepers call blanket weed.

Basically, algae is a fast-growing plant, and like any other plant, it needs sunlight, nutrients (nitrates from fish waste) and oxygen to survive. That's why a pond in spring is like an all-you-can-eat buffet for algae. In spring, temperatures warm up (most algae is dormant in the cold), the sun shines longer, and the now-active fish eat more and excrete increased organic waste - one of algae's favorite foods.

The result is something that Burt Ballou calls "New Pond Syndrome." "You get green water when a pond is new," says Ballou, three-time past chairman of the Associated Koi Clubs of America, an AKCA-certified judge and a pond designer. "It's that time before a biological water filter is fully functional."

A filter is fully functional when a beneficial bacteria called heterotroph builds up around it to help break down the algae (the process is called aerobic bacterial decomposition). "Essentially, it's the same thing that takes place in a compost heap," Meck says. Unfortunately, "algae becomes more active at a slightly lower temperature than the heterotroph bacteria. "That means the filter has to play catch-up. Hence, the Green Menace.

The problem with green water isn't just that it shrouds the beautiful fish. It can significantly reduce oxygen levels, possibly leading to unhealthy or dead fish (algae lets off oxygen in the day but absorbs it at night). "That's when you go to bed and the next morning your fish are gasping," says Greg Bickal, a koi breeder in Toddville, Iowa, and member of the Eastern Iowa Pond Society.

The algae issue is further exacerbated in regions of the country with a severe winter. Not only has muck built up on the pond bottom, but so has fish waste - all during a time when the filter hasn't been running. "Basically, people shut down their ponds," Ballou says, "and in spring, they start it back up again. It's 'New Pond Syndrome' all over again until the owner gets things back in balance."

Keeping a pond balanced and green-free is like dieting; it takes work and diligence. "It's about establishing a natural, healthy system," Bickal says. Luckily, the experts have a variety of methods to not only combat the Green Menace but to completely annihilate its chances of taking hold of a pond. Here are their five tips for beating green water blues.

When Ballou hears of a pond keeper complaining of green water, he can pretty much surmise that something's wrong with the filtration system. "Either the filter isn't big enough, or the turnover rate is too slow," he points out. "Say you have a 10,000-gallon pond that turns over every 74 hours. In that time the ambient ammonia levels are high enough to cause nutrient buildup."

Bruce Hillam, a 25-year koi hobbyist in Pomona, Calif., also recommends cleaning the filter regularly, even every day. "Sometimes I give the biological filter help with [an ultraviolet] filter," he says.

A UV filter passes water through a light that breaks down the algae's cell membrane wall, causing cells to clump together so that they are large enough to be removed by the biological filter. "The UV filter is a wonderful tool that's not harmful to my fish," says McWicker, who uses a common bottle brush to scrub blanket weed from the sides of her pond. "I use the UV filter until the water warms up, and that usually takes care of the algae."

Hillam shades his pond to discourage algae growth. Plants floating on the surface, planted around the rim or submerged can provide shade, too. Like algae, they produce oxygen during the day but absorb it at night. "However, plants can help balance the nitrate levels," Bickal says. "I like to use water irises in the spring because they come up early."

Plants balance the nitrate levels because, like algae, they use it for food. It's like a competition for the food, and the larger, more-rooted plants usually win in this backyard version of "Survivor." They also decrease the pond's carbon monoxide levels.

Plants can, however, decay or drop leaves that decay, and this debris converts into food. "It's important not to overload the filtration system with decayed matter," Meck advises. "If a pond is designed well, plants can be very efficient, but just putting plants in the water doesn't work."

"I've had friends with green water in their ponds, and yet they say, 'All I need is one more fish,'" Hillam reports. "Every koi pond I know is overpopulated. These fish started out as cute little 2-inch fish, but now they're 15 inches."

The standard stocking rate is 250 gallons per fish; yet it's not just the number of the fish that affects algae, it's also the size. "When a fish doubles in size, its waste product doesn't double," Meck says. "It goes up by five. If you have six fish who double in size, you now have 30 times the waste load you had before."

Overfeeding is another issue. Using high­quality food means less waste. "When a fish poops, that waste is nitrogen-based. That's like fertilizer,'' Ballou explains. "It's like fertilizing a lawn, only you get algae instead of grass."

The third component that algae needs is oxygen, and that can leave fish lacking. Increasing oxygen via aeration has several advantages, foremost that moving water discourages algae growth and dead spots that don't go through the filtration system.

"It's extremely important to add oxygen," Ballou notes. ''If the oxygen level goes down, the filtration will go down. You want to design a pond so you get optimum oxidization." Features such as such air pumps, water movement (waterfalls and venturi) and diffusers (such as golf-ball airstones or air domes) help oxygen to diffuse throughout the pond.

Experts also advise replacing 10 percent of the water every week to rid the pond of bacteria and fish pheromones (which can inhibit growth of other koi in the pond). "This stuff builds up in the water,'' Bickal says. "It causes stress and more health problems for the fish. Replacing 10 per­cent of the water each week is something pond owners must do."

A healthy pond is about balance, and algae thrive in a pond that's out of balance. Many serious hobbyists test the water regularly for nitrate, oxygen and pH levels as well as temperature. Often, the results of these tests can warn a koi keeper of problems with the filter, the amount of food to use or high ammonia levels before these issues become serious. 'What you're trying to do is to get things stable," Hillam says.

Another choice for stabilizing the balance and ridding a pond of algae is the use of herbicides and algaecides. Some hobbyists, such as McWicker and Hillam, won't use them for fear of hurting fish, but at times they can be very useful, such as when there's a parasite or bacteria problem, Ballou says. He warns, however, that chemicals can be tricky, especially to someone new to the hobby. "You have to be a bit of a mad chemist," he says.

The invasion of the Green Menace sounds like something that a comic book superhero has to bravely fight to the death. In reality, it's something that every koi keeper can conquer. With constant attention to these five elements, koi lovers can protect their fish and be able to see them, too. Algae may be the Green Menace, but it's no challenge for the diligent pond keeper.

"I haven't had green water in five years," Hillam boasts. "I'm making sure that I never see it again." Patricia Morris Buckley is a freelance writer based in San Diego. She is a regular contributor to Pet Product News, as well as various other publications.